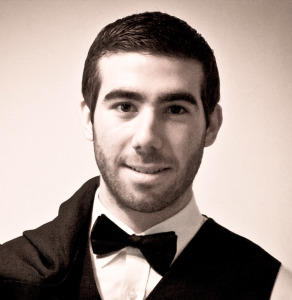 Armenian-Canadian bass-baritone Vartan Gabrielian, from Toronto, entered the Curtis Institute of Music in 2012 and studies voice with Marlena Kleinman Malas.

Mr. Gabrielian, a grant holder and winner of the annual Jacqueline Desmarais Foundation Competition, began voice lessons at age fourteen. Prior to attending Curtis, he attended the Royal Conservatory of Music and the Young Artist Performance Academy of the Glenn Gould School in Toronto.

His recent credits for the Curtis Opera Theatre include the Loudspeaker in The Emperor of Atlantis; Mago and Eustazio in Rinaldo; Betto in Gianni Schicchi; a Lackey in Ariadne auf Naxos; Trulove in The Rake’s Progress; and Bartolo in Le nozze di Figaro. At the Chautauqua Institution he has appeared as Il Re in Ariodante, Colline in La bohème, Masetto in Don Giovanni, and M. Javelinot in Dialogues des Carmélites. Other credits include a Cappadocian in Salome with the Detroit Symphony; and the title role in Le nozze di Figaro with Vancouver Summer Opera.