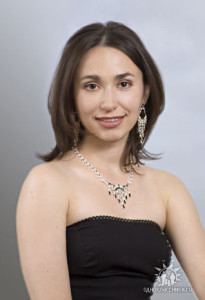 A native of Belarus, Tatyana Halitskaya arrived in The United States in 2003. She graduated from Belarus’ Republican Art College, where she studied piano and choral conducting. She entered Belarus’ Academy of Music to study vocal choral literature in the department of canto singing with Professor Lubov Kasporskaya.

Tatyana began performing at the age of 14, singing solo parts (“Peter Pan”, “Puss in Boots”, “Magic Music”, “Carmen”) with the Junior Opera Studio affiliated with The State Theater of Opera and Ballet. In 1996 she joined The State Chamber Chorus in Minsk, Belarus, performing as a soloist from 1998 to 2002. During this time she toured Poland, Germany, and Luxembourg. She also appeared as a soprano soloist with the Minsk group Kapella “Sonorus”, in Mozart’s Requiem in France, Spain and Italy.  Her solo repertoire is particularly strong in worksfrom the Baroque and Classical periods.

Tatyana arrived on the United States in 2004. She sang for Mendelssohn Club of Philadelphia for two seasons (2005-2006).Tatyana currently performs with the Ama Deus Ensemble since 2005, performing soprano solos in the Verdi Requiem, Brahms Requiem, and works by Beethoven (Ninth Symphony; Die Ruinen von Athen  (Ruins of Athen); andChoral Fantasy for Piano, Chorus and Orchestra.)

She has been an Artist in Residence  for the  New York Lyric Opera Theater . From 2010 to present, she teaches at Mozart Music School (Newtown , PA,  vocal and piano teacher), and performs vocal recitals in the Philadelphia  area.