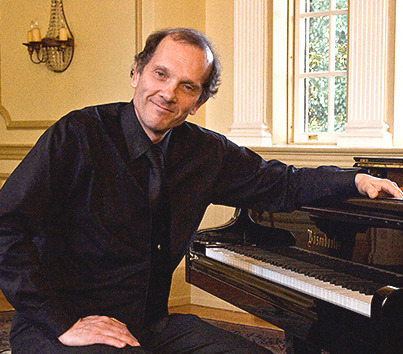 Rollin Wilber, pianist, was raised in the New York City area, within an extended family of professional musicians (father 1st Horn with the NY Philharmonic; mother, 1st Horn with the New York City Ballet Orchestra). He began piano studies at age eight with his grandmother (a rare female concert violinist of 1900 era), and performed publicly from the age of 16. He graduated from high school one year early and began studies with Temple University’s Mr. Maryan Filar, internationally acclaimed pianist and Chopin interpreter, and a protoge of Walter Gieseking. He continued his rich studies with Mr. Filar well beyond graduation.

Rollin has been an active recitalist for the last forty years, including performing numerous concerto solos with local orchestras. His background is extensive in chamber music and accompanying; he performed regularly with his own piano-violin-cello trio in the 1990’s. He teaches piano, and is a composer of numerous works, and written pieces performed for the theater. He created his own series of dramatic narratives within a music recital, presented as Stories in Concert, and developed original seminars called the Art of Listening series, exploring the language of expression in live music, debuting it at the Chautauqua Summer Institute in the summer of 2000.

Nurturing he lifelong passion about sharing music informatively with people, he formed a presenting and performing group with a few colleagues, called FINE ART MUSIC COMPANY, in 2010. This continues today with its purpose to bring music and people closer together in a beneficial and fulfilling experience. He worked to develop a series of seasonal performances at IVY HALL, on historic Lancaster Avenue in Philadelphia, where the group acts as artist-in-residence, creating rich programs of intimate performances given in Ivy Hall’s restored ballroom.

Most recently, he is the performing pianist for the Philadelphia Ethical Society, and is the director of a new concert series, since 2014, at their Ethical Society Building on Rittenhouse Square, in Center City, Philadelphia, under the auspices of that group in collaboration with Fine Art Music Company. He is currently developing a growing series of salon-styled concerts and seminars with creative programming and an emphasis on the deepening of audience involvement and musical understanding in performance.