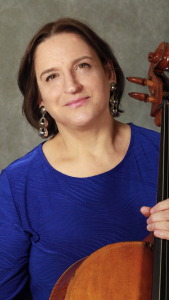 Michal Schmidt, described as “an inspired and inspiring musician, a captivating artist” is an Israeli musician who is active as cellist and pianist. She is a member of numerous performing ensembles including Philadelphia’s Network for New Music, Piano4, Trio Camille, Trio MiReSol and Trio Tiadam in Israel.

Ms. Schmidt majored in both piano and cello at Tel Aviv Univeristy’s Rubin Academy of Music and on a scholarship from the Israeli Arts Council she continued her studies at the Royal Academy of Music in London, England. There, she received Artist Diplomas with Distinction on both instruments in a single year.

In the US Michal studied at the Curtis Institute of Music under cellist David Soyer (The Guarneri Quartet), she recieved her Masters in Cello Performance at the University of the Arts under Lorne Monroe (principal cellist of the New York Philharmonic Orchestra) and her doctorate at Temple University, under the tutelage of Jeffrey Solow.

In 2007 Ms. Schmidt established a series in Philadelphia, “TRIBUTE: Music of Friends Performed by Friends”,  in which she presents works of contemporary composers she personally works with. Additional TRIBUTE concerts are dedicated to other composers, such as the Brahms Sonatas Marathon (2007), Schumann’s 200th anniversary (2010), a Beethoven Marathon of all the cello sonatas (2015).

Michal performs regualrly in various settings. In 2014 she was the principal cellist of the Philadelphia Chamber Orchestra on its national tour with soloist Branford Marsalis. In 2015 she performed with Mr Marsalis in a special concert presented by Music Transforms. Ms. Schmidt’s 2017-2018 season included numerous cello performances as well as collborations with singers, string players and a tour in Israel with Trio Tiadam. Ms. Schmidt’s 2018-19 season will include numerous rectials in the US and Israel, of solo works for solo cello, a Schubert Tribute honoring the 190th anniversary of the composer’s death and a special tribute dedicated the music of  award-winning Philadelphia composer, Andrea Clearfield.