Praised for his “beautiful tone” and “exceptional quality of nobility in his playing,” Filipino violinist and violist, Lorenzo Raval, is acclaimed for his versatility and dedication to the numerous aspects of his instruments – as a soloist, chamber musician, orchestral player, and teacher. Lorenzo currently performs as violinist and violist with the Prometheus Chamber Orchestra, and is an active freelance musician in the Philadelphia area. 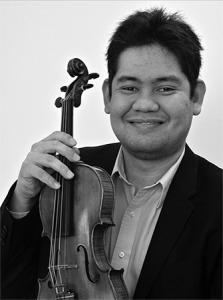 Born and raised in Quezon City, Philippines, Lorenzo received his Bachelor of Music in Violin Performance and Master of Music degree in Viola Performance from the Boyer College of Music and Dance at Temple University. He also attended the University of the Phillipines as a violin and music education major, and was a scholar at the Philippine High School for the Arts. His teachers include violinists Alfonso Bolipata, Helen Kwalwasser and Odin Rathnam, and violist Che-Hung Chen.

A two-time prizewinner at the Philippines’ National Music Competition for Young Artists in 1999 and 2002, Lorenzo has appeared as soloist with the Metro Manila Concert Orchestra, the University of Santo Tomas Symphony Orchestra and the Pundaquit Chamber Players, and has given recitals at the Cultural Center of the Philippines, Francisco Santiago Hall, and Corpus Hall at Casa San Miguel. He was first violinist of the Corpus String Quartet and was violinist and violist with the Pundaquit Chamber Players, performing chamber music in concert halls and alternative performance spaces in Manila, Zambales, Ilocos, Boracay, and Davao.

Lorenzo currently lives in South Philadelphia, where he maintains a small private studio of violin and viola students, and is a faculty member at the Leopold Mozart Academy in Elkins Park and Morrisville, Pennsylvania.