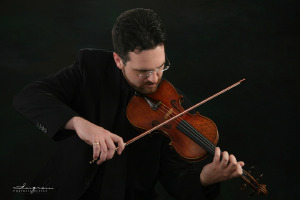 Jonathan Moser, has loved music ever since childhood when he would sit under the family piano listening as his parents and grandmother played Beethoven, Chopin, and Rachmaninoff. His formal musical education began as a violin student, an education he pursued through a Bachelor of Music in Performance degree from Shenandoah University and a Master of Music in Performance degree from Arizona State University, with additional Doctoral studies in performance. Mr. Moser has enjoyed working with many outstanding teachers including Katie McLin, James Stern, Sergiu Schwartz, Linda Cerone, and Ronda Cole, and he has performed in master classes with Jaime Laredo, Claude Frank, Sylvia Rosenberg, Shlomo Mintz, and Sergiu Luca.

During his studies, Mr. Moser enjoyed minoring in voice, studying viola, and discovering his love of conducting. He has now been directing music programs for many years. This fall he begins new positions as Orchestra Director at Kutztown University and Music Director of the Wilmington Community Orchestra. Mr. Moser also recently joined the Philadelphia International Music Festival as Orchestra Program and Adjudication Director. Before moving to Philadelphia, he was the Director of Orchestras and Instructor of Music at Westminster College and served as adjunct faculty for Grove City College. He has also been the Director of Music at University Presbyterian Church, Providence Presbyterian Church, and Proclamation Presbyterian Church.

Singing has always been a part of Mr. Moser’s musical milieu. A member of a long line of vocalists – most notably his great-grandmother, who sang with the legendary Enrico Caruso in the Metropolitan Opera during the early 1900’s, Mr. Moser began singing as a soprano in the church choir, gradually working his way to the bass section. He minored in voice in college and then did not pursue further training until very recently. He is excited to be making his début as a tenor in a pair of concerts this September in recognition of Pope Francis’ upcoming visit to Philadelphia and in honor of National Hispanic Heritage Month.

An active performer, Mr. Moser regularly concertizes with chamber ensembles, as a recitalist, and with orchestras. He is a member of the Music at Ethical: Concerts on the Square players and the Bay-Atlantic Symphony. For two years he toured extensively with Sandip Burman – an internationally renowned tabla artist. Mr. Moser was also a member of the Wheeling Symphony and the Erie Philharmonic. Mr. Moser has served as concertmaster for Pittsburgh Opera Theater, Music on the Edge, the Erie Philharmonic, and Musica Nova, among others. He has served as principal second with the Bay-Atlantic Symphony and the Wheeling Symphony. Mr. Moser was winner of the Pittsburgh Concert Society Solo Competition, the Philadelphia College of Bible Solo Competition (2 years), the Northern Virginia Music Teachers Association Solo Competition, the Shenandoah University Concerto competition, and was a finalist in the National Symphony Orchestra’s Young Soloists Competition. Mr. Moser was a founding member of the Arizona State University’s Katherine K. Herberger Graduate String Quartet. He also enjoys other opportunities to collaborate with ensembles such as the Pittsburgh-based contemporary group and ensemble in residence at the University of Pittsburgh, IONSOUND.