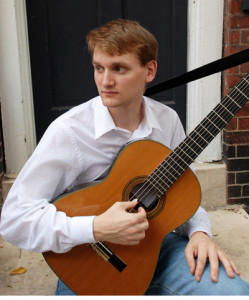 Noted by ClevelandClassical for his ability to “bring out subtle inner details” and to “communicate directly with the listener”, classical guitarist Gideon Whitehead is quickly establishing himself as an outstanding and captivating artist.  In June 2013, he celebrated the release of his debut album Russian Romance featuring rarely-played classical guitar music from Russia.  Gideon has performed solo recitals for the Cleveland Classical Guitar Society, the Guitar Society of Michigan, the Sturgis Council of the Arts (Sturgis, MI), the Louisville Guitar Society (Louisville, KY) and Hope College (Holland, MI) among others.  In 2012, he made his New York City debut in a concert at the Metropolitan Museum of Art.  As a chamber musician, Gideon has had the honor of collaborating on numerous occasions with world-renowned violinist and Philadelphia Orchestra Concertmaster David Kim. Since beginning his studies at the Curtis Institute of Music in 2012, Gideon has premiered two works for guitar and string quartet, along with works for solo guitar, guitar and violin, and a song cycle for soprano and guitar.  In addition, he has appeared in chamber music performances for the Cleveland Classical Guitar Society, the Stars in the Classics series in Cleveland, Ohio, and at Tenth Presbyterian Church in Philadelphia, PA.  Gideon has earned prizes at the 2011 James Stroud Guitar Competition and the 2010 and 2011 University of Louisville International Guitar Competition.

Gideon is committed to serving the community through his music. He frequently performs for residents at retirement living centers and nursing homes and presents the classical guitar to children at schools as both education and entertainment. While studying at the Cleveland Institute of Music, he was heavily involved in the school’s Community Outreach Program, performing in more than fifty events.  Presently, Gideon is active as a mentor with the Curtis Institute of Music’s Community Engagement Mentor Program.  In January 2013, he was selected to participate in Curtis’s newly developed Community Artists Program (CAP), for which he is currently developing a guitar-teaching residency at the Science Leadership Academy in Philadelphia beginning in February, 2014.

As a dedicated teacher, Gideon has maintained a small, private studio since 2007.  He was a workshop leader at the inaugural White Lake Guitar Festival in Montague, Michigan in 2012, and in the summer of 2010, taught guitar classes at the Blue Lake Fine Arts Camp.  Gideon holds a Bachelor of Music in guitar performance from the Cleveland Institute of Music and will complete his Artist Diploma at the Curtis Institute of Music in May, 2014.  His current teachers are renowned guitarists Jason Vieaux and David Starobin, and he has performed in master classes for Manuel Barrueco, Christopher Parkening, Lorenzo Micheli, and Marcin Dylla among others.