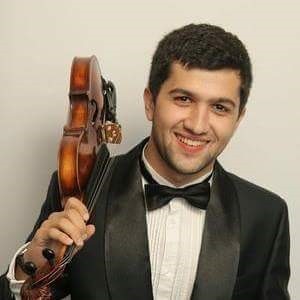 Azer Damirov, violinist began his musical studies at the age of eight. At 14, he was accepted in the Musical College of the Tchaikovsky Moscow State Conservatory in the class of Professor Maria Keselman from which he graduated in 2007 at the age of 20 with an equivalent of a Bachelor Degree Diploma. Azer participated in master classes and festivals in Dortmund in Germany, Britten-Pearce Orchestra in Great Britain, and Volga Regional Young Symphony festival.

Recipient of the Ministry of Culture Russian Federation’s Stipend, Azer is a Laureate of numerous national competitions. In 2007 Azer received a Diploma at the 14th Andrea Postacchini International Violin Competition in Fermo, Italy, and a special iPalpiti prize for participation in the iPalpiti Festival of International Laureates in Los Angeles. In the fall 2010, Azer was accepted into Bachelor of Music Program at Boyer College at Temple University in the class of Professor Schmieder, where, subsequently he completed his Master’s degree in 2013, and currently pursues a Doctoral degree in Music Performance.

Recently, Azer formed the Philadelphia-based The Amaranth Piano Trio with several performances in its debut season. He is a member of iPalpiti since 2009, including East Coast residency and in concerts at the Kimmel Center and Carnegie Hall, and Los Angeles festivals. In 2012, he performed at Weill Recital Hall at Carnegie Hall as a winner the American Protégé International Competition of Romantic Music.